Hello and welcome to another edition of The Expert Belt. This week, our featured card is no stranger to those who are in the know of the current meta-game. It’s also not a brand new card but more or less, a return due to a surge of cancer being played competitively.

With Sun & Moon’s Decidueye GX decks plaguing the meta-game, players are forced to combat the illness decks. With that, a volcanic resurgence of an old friend who I personally thought has extinct (due to Garbodor‘s popularity pre-Sun & Moon).

This week’s featured card is none other than Volcanion EX from the Steam Siege expansion. 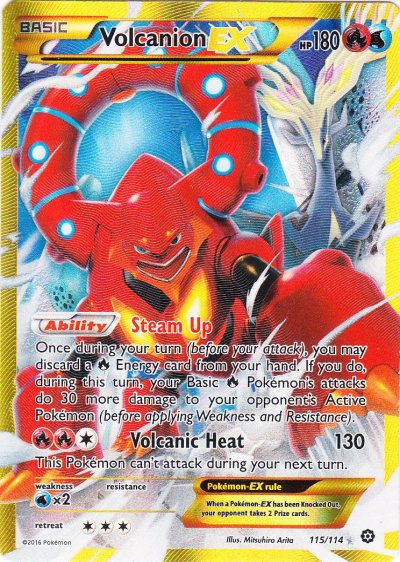 Volcanion EX is a Basic 180 HP Pokemon with dual types; Both Water & Fire Type. It is weak to Water () and has a Retreat Cost of 3.

Volcanion EX’s main draw is his unique Ability which is called ‘Steam Up’. ). Once during your turn, you may discard a basic Fire energy from your hand, and it will boost your Basic Fire Pokemon attacks by 30 damage. The main draw is that if you have 4 Volcanion EX in play and you can use Steam Up once on each of them, discarding 4 Fire Energies, and dealing a bonus 120 Damage.

Volcanion EX’s only attack is Volcanic Heat which for [F][F][C], you do a solid 130 Damage, but this Pokemon cannot attack the next turn.

Volcanion EX of course has it’s own deck. Mainly playing around with Basic Fire Pokemons. The regular Volcanion is basically the bread and butter of Volcanion decks. With you discarding Fire energy via Steam Up, the regular Volcanion can use Power Heater to help attach energies to your Bench while doing loads of damage at the same time. 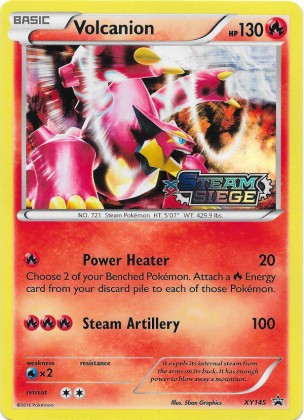 Besides the regular Volcanion which is a core in the deck, Volcanion EX is mainly the attacker for the deck with its 130 damage as not much of the Basic Fire Pokemons can match that damage output with only 3 Energy. Below are the few attackers that can be seen in a Volcanion deck. 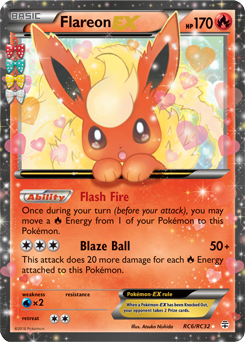 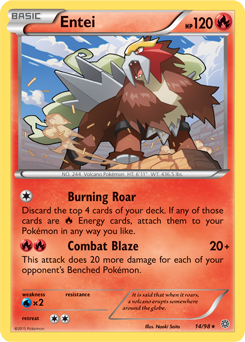 Only 2? Yup, sometimes you don’t even see them being played or put into the deck. Volcanion EX is far superior in terms of damage output. Flareon EX however is a decent in today’s meta-game due to its magic number (With a FFB attached, Blaze Ball does 50 damage + 20 more damage for each Fire Energy. With its 3 cost attack it would be 50 + 60 + 10 = 120 damage) and no restriction attack, which you will be able to keep on attacking with it each turn.

A constant 120 Fire attack on a Decidueye GX deck is massive, with Decidueye GX having 240 HP. Entei is more straightforward, a non-EX attacker that puts pressure on your opponent for Bench-ing more Pokemons, dealing a total of 120 damage for 2 Fire Energy if your opponent has a full Bench of 5 Pokemons.

As for the new attacker on the block, we have Salamence EX promo. 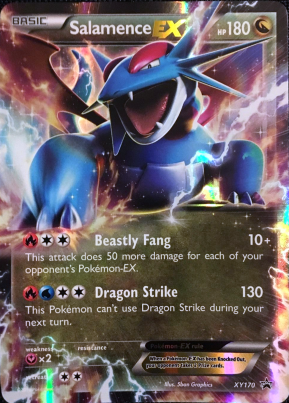 Salamence EX is a scary attacker if given the correct conditions. It’s mainly used for its first attack, Beastly Fang where it does 10 damage plus 50 more for each of your opponent’s Pokemon EX (Remember, GX doesn’t count!). Since Volcanion decks play Fire Energy (), the deck is able to utilize Salamence EX. With only 4 EX, it’s already doing 210 damage! Do note that you cannot boost Salamence EX’s damage with Steam Up since Salamence EX is a Dragon type.

Now, besides a full on Volcanion deck, Volcanion EX has been used in other decks too, most notably Rainbow Road decks due to Volcanion EX’s dual typing, increasing the damage output of Xerneas. Another deck is Mega Rayquaza EX, wait what? Mega Ray deck? Serious? Yes, Volcanion EX is mainly used to discard Fire Energy to allow a T1 Mega Turbo to Mega Rayquaza. Innovation people! 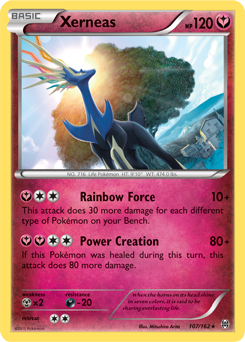 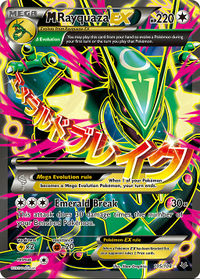 All in all, Volcanion EX is actually pretty versatile but mainly used as a deck on its own. Thinking on how Volcanion decks work, it is actually very similar to Plasma TDK decks in the past, where Thundurus EX would hit hard and charge an Energy to its Benched Plasma Pokemon. Ahh, good memories.

Before moving on, here is the result from last weekend’s League Challenge that is held at Toysbar on 1st April 2017 ()

Looks like Cancer got incinerated during last weekend’s LC.

There is no interview for this week’s edition of The Expert Belt due to time constraints.

Overall, Volcanion EX is overall a great EX card in format. With future SM2’s Turtonator GX coming up, Volcanion decks will only get stronger from time to time. As a heavy hitter, its quite a versatile card in few decks besides its own. Although Alolan Muk is still around to counter Volcanion decks, I still personally think its in a good place in the meta-game right now compared to the season pre-Sun & Moon.

And that’s it for this week’s edition of the Expert Belt!  Thanks for reading peeps!

If you missed out on the last edition of The Expert Belt, click here to begin reading!

*All graphics belong to their original owners and no copyright infringement intended.